When we talk about the term “Arabic”, we usually don’t just mean Saudi Arabia alone. The whole of Middle Eastern countries come under this term. People often get confused about the regional clothing concepts. Arabic traditional clothing involves the clothing styles of Arabia and Gulf countries. These countries truly follow the Islamic traditions of clothing and it reflects in their lifestyle. I would like to write in detail here what Arabic Clothing is and what are the various styles which would complement your style statement.

Arabic clothing follows the guidelines of Islamic clothing and the local people make sure that they are fully covered in the scorching heat, harsh winds and hot sand. A thawb or thobe is known as a garment in Arabic. It refers to any kind of clothing used in middle eastern or other Muslim countries.

First we need to analyze the geographical background of these countries. You would be thinking what does geography has to do with the clothing styles?? Well, it makes a huge impact which you would know shortly. The middle eastern countries are mostly dry and humid. The deserts make this part of the world very hot. All the middle eastern countries promote modest clothing where only some part of the body is shown like the face and the hands only. In the extremely hot weather, wearing modest clothes is the best option as the body is protected against the harmful rays of the sun. There is no sun burn as the whole body is shielded from the sun, wind and the sand.

We often think that Arabic traditional clothing means a white gown for men and black veil for women. Well this is however not true. With so much happening in this world, Arabic countries have emerged as one of the most stylish places in the world. We can see the blend of both western and Islamic clothing. Mostly young people like to dress up in their western attire whereas modest Islamic clothing is confined to religious gatherings and other social events.

When I went to Dubai, I could not distinguish between western and Islamic clothing. People everywhere were mostly dressed up in western clothes. The fact is that Dubai is a place where diversity in religion, culture and tradition is seen. People from different ethnicity come here and become part of this dream destination. As we move towards Saudi Arabia, there is a huge difference. People are covered from top to bottom, following the Islamic clothing norms. Men are seen in white attire whereas women are draped in black gown known as an Abaya.

Let’s look at some common Arabic clothing terms which would explicitly explain the concept of Arabic traditional clothing. 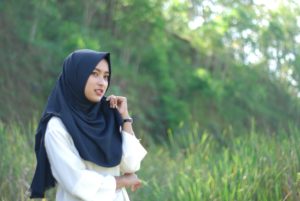 A veil or a hijab is commonly used in the middle eastern countries. This is a misconception that there is just one kind of veil used. The fact is that there are many styles of veil which are worn by different Muslim women. Some Arab women are Jews and Christians and they would not follow the modest clothing rules. Only Muslim women go according to the Islamic clothing concept.

Now this is a one piece veil or a scarf worn comfortably in the Middle Eastern countries with the exception of Saudi Arabia. It is wrapped around the head and pinned at the chin where  it rests on the shoulders. Some women like to show the pin and some don’t. It’s a matter of their personal choice. I personally like women not showing the pin or the cap as I feel it looks a little untidy and messy. If the rim of the cap has some fancy look to it then it would complement the veil. This type of cap can easily be shown to make the veil look more pretty. Muslim women keep different colors of veil to make sure each one goes well with their outfits.

This is the two piece veil which comes in the tubular shape as opposed to the Shayla which has a rectangular shape. This scarf is worn as a head cap and tubular scarf. This type of veil is very common in Saudi Arabia and also some Muslim Asian countries.

This is a face veil which is tied to the back of the head. This type of veil, also known as Saudi Niqab, only shows the eyes and is most commonly worn by Saudi Arabian women. It is also commonly worn in some Muslim African countries. Some women also like to cover their eyes and have a special niqab for that but the most common is the one which shows the eyes.

This is a long veil which covers most part of the head and body and goes down to the waist. This type of veil is not very common now but I have seen some Muslim women wear it when they go outside.

This is most commonly seen in Morocco. It is an over dress worn only at special occasions, also known as Maxi Kaftan. It is worn by women who like to show their kaftan at social gatherings and other events. 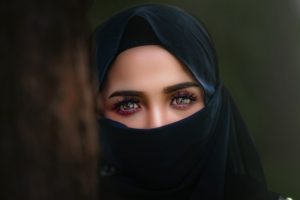 This is not worn commonly in the Arab countries but people think that it is. This type of Islamic clothing originates from Pakistan and Afghanistan. The burqa is a long gown with a face veil which covers the whole body. There are some areas where a burqa is seen in the Arab world but it is less common.

This is the outer garment which is worn  by women over their regular clothes. It is a long gown not covering head, hands and feet. This is most commonly worn in the middle eastern countries by the Muslim women. I have seen Abayas in different styles and designs. The modern day Abayas are very beautiful and have unique designs.

This looks like a trench coat or a rain coat worn as an outer garment. This is a full length coat worn with a head scarf. It looks very chic and elegant and comes in various designs.

These are the most common outfits worn across the Middle East and other Muslim countries. Modern day has marked new ideas and designs especially in head scarfs and Abayas. I will write some fashionable styles here just to give an idea that modern Arabic Clothing Styles are very elegant, modest and yet beautiful.

Shirt and Pants with Long coat 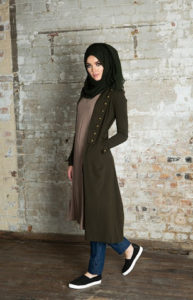 Shirt and Pants with Long Coat

My personal favorite is the complete attire of pants, shirt and a long over coat with a head scarf. This looks classy and still obey the rules of modest clothing. Many women have supported this type of modern day Arabic clothing in various parts of the Middle East. It is not very common in Saudi Arabia but seen elsewhere. 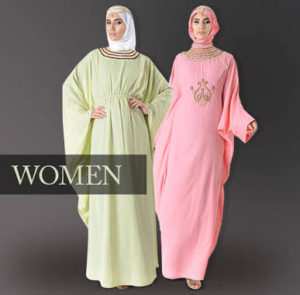 I am a huge fan of kaftans. I think that they are not only elegant but also fulfill the rules of modest clothing. There are various designs to choose from and it can be supported by a head scarf. These kaftans are different from the traditional ones worn in rural parts of the world. They are full length gowns with belts and frills placed intelligently. Most women don’t prefer to wear kaftan with a head scarf. It is a matter of personal choice what suits your personality and religious beliefs. Modern kaftans are worn in Morocco, UAE, parts of Pakistan and Qatar. They would not be seen commonly in Saudi Arabia and Kuwait.

These are worn as an outer garment when women go out. With modern day trends, the traditional Abayas have been replaced by the more stylish yet elegant styles. These are not only seen in different colors but also different designs and styles. Some are embellished with diamantes and some are crafted with embroidery. This gives a whole new look to the Abayas making them more beautiful.

Some of them are decorated with ribbons and belts. It is up to your personal taste and choice that which one best suit your look. I prefer Abayas with hand embroidery on the sleeves and neck, embellished with some matching stones. The neck and sleeves are more prominent areas of the Abaya and need to be exposed more. There are different styles of sleeves which support many designs. 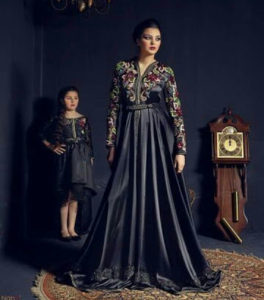 I simply love fancy gowns for special events. They not only give a delectable look but also make you look elegant. Evening gowns are crafted with embroidery and stones. These stones sparkle at an evening event making your outfit noticeable. Fancy evening gowns can be worn with a head scarf. Arabic women wear evening gowns with head scarves to make them look beautiful and classy.

The above mentioned Arabic traditional clothing and some fashionable styles have been geographically categorized and based on the most common use. There are various other styles which I haven’t discussed here but would give a full account on in my next articles. I have observed Arabic clothing very closely and these are the views I wish to share. Arabic Clothing is very diversified and holds many other styles and designs. These clothing ideas would tell you that Arabic Clothing is just not confined to a black Abaya. There is much more to it with many new and trendy styles.